Some examples of our work.

Click on the image to view before and after pictures.

This lovely old faded leather chesterfield armchair came to our workshop for restoration. After cleaning and conditioning the colour was restored to its former glory. 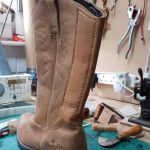 My client had a stroke and couldn’t use his Wrangler Cowboy boots. I cut the backs and added a flap so that he could get his foot in again.

Repairing a hole in leather 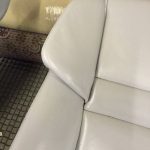 This car seat had seen better days. I was able to place a patch under the holes and then use a filler follower by re-pigmenting this seat. 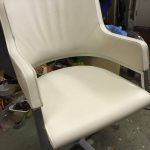 These office chairs were very soiled, I thought I’d take a photo half way through cleaning to show the true colour. 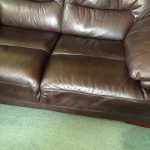 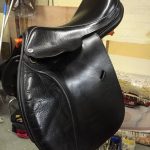 This John Whitaker saddle turned up on my work bench one day. I was asked to make it presentable as my client was leaving she mentioned that she would have preferred the saddle in black. We had a brief conversation and this was the result. 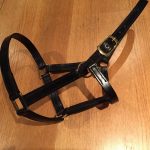 I love working with leather be it cleaning, restoring or making. I had great fun in producing this head collar for my client and was pleased when she sent me a photo of George waring the finished item. My client was so happy with the collar that she ordered a number of bespoke dog collars. 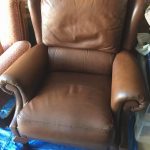 This old arm chair was left to my client after his mother died. He didn’t want the chair restored as he wanted to retain its patina as a memory but he did want the chair cleaned. The main issue was the build-up of hair spray on the headrest. 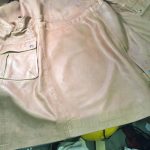 My client managed to get paint on her designer jacket. I managed to remove most of the paint and then disguised the rest with some pigment. 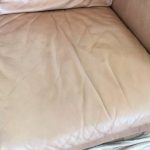 The finish on this base cushion has worn off over the years. I was called in after my client had used a general cleaning product in the attempt to remove a stain and in doing so had started to remove pigment from the cushion.